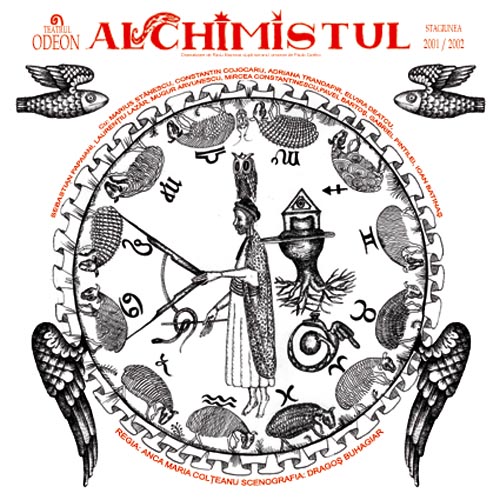 In an age without mistery, in an age when on stage or at TV, the spectator is pestered with surrogates and vulgarity, “The Alchemist” wants to be an alchemic, purifying and therapeutical performance.
Its story began with an urge: “Read this book and put it into a performance!”. I read it and began to want to do this performance. Six years had passed and I hadn’t done anything for it. I think it had to be done now. It’s a performance that does not belong to a particular moment in time. It breaks off from the present, it’s stronger than the present, it goes beyond the present. It’s a performance made up of notions that stood up eternity: God, love, dream, luck, a dramatic score of man’s existence. It’s a story about dream, faith and love. A lesson in alchemy."

„Consciousness Isn’t the Best Sold Ware in the World"
Double premiere at the Odeon Theatre: the staging of “The Alchemist” and the re-launching of Paulo Coelhos novel.
Romanian theatre begins to be an authentic partner in the market economy. An example is the double premiere at the Odeon Theatre, from Sunday, April the 7th. It consists of an unusual partnership between Humanitas publishing house, managed by Gabriel Liiceanu and the Odeon Theatre, managed by the actress Dorina Lazar.
Irina Budeanu – Azi
Anca Maria Colțeanu brings together the audience and the actors on the stage of the Odeon Theatre. She composes a fairy-like, exotical atmosphere, impregnated by an Oriental fragrance. The performance is dominated by the miraculous. This modern tale has had two catalysts. In “The Alchemist”, Dragoș Buhagiar, as stage-designer, and Marius Stănescu, as the protagonist, give us proof of their unique talent. The set renders the performance a continuous tension. Together with the costumes it moves the eye, it feeds the actors’ feelings and chimaeras, it talks with them, it expresses their drama.
Theatrical, enigmatic, glamorous, yet shocking, the set and the costumes suggest a place and a time both modern and archaic, an alchemic recipient with which we can identify. The one who renders tension and emotion to the performance is Marius Stanescu, that portreys Santiago. With simplicity and spirit, he embellishes this ars amandi mistica. He is supported by the other actors, who manage to do a sketch of their characters: Sebastian Papaiani, Pavel Bartoș, Adriana Trandafir, Constantin Cojocaru, Elvira Deatcu, Mircea Constantinescu, Laurențiu Lazăr, Ioan Bătinaș, Mugur Arvunescu and Gabriel Pintilei.
Ludmila Patlanjoglu – Curentul
The performance at the Odeon Theatre is based on an intelligent drammatization, done by Radu Macrinici and is directed by young Anca Maria Colteanu, who chose to work with the stage-designer Dragos Buhagiar. What can any director want, more than to work with a talented, highly immaginative stage designer, capable of rendering solutions and creating discreet symbols.
Buhagiar’s set serves the performance so well, that it’s hard to separate the director’s contribution from the general solution oferred by the stage-designer.
The casting is also very good. Marius Stanescu, as the main character, shows both man’s frailty and force, coming from obstinately pursuing one’s ideal. Marius Stanescu’s roles recommend him as an exceptional talent, a very rare and precious type of actor.
Florica Ichim – România Liberă, April 19, 2002
Undoubtedly, “The Alchemist” of the Odeon Theatre is that kind of artistic event that makes you want to go 10 kilometres on foot, in order to relish the pleasure of an authentic, and possibly saving revelation.
Gabriela Hurezean – Național, April 16, 2002
Scroll