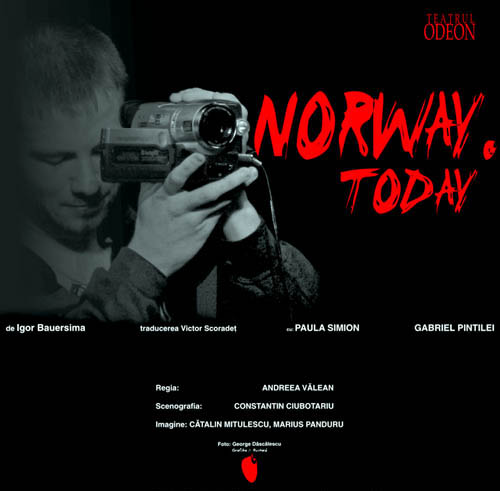 A piece of pop culture burden, a true and full of humor and a plea for the Internet generation life dealt movie theater into the term.

“norway.today” is a fashionable play on the European stages. Its succes isn’t hard to explain. “norway.today” is a two character play (actually, there are two characters and the camera, which plays a very important role in the conflict ). It’s a well written play, with serious parts and intelligent dialogues.The author (born in 1964, film director, and nominated by “Theatre Heute” magazine as the best young playwright of the year, for this play) was inspired by an article read in a newspaper, which he rendered depth and semnificance to: a boy and a girl, with different social background and education, will commit suicide together, by throwing themselves from a Norwegian glacier.
In fact, the play has an open ending. Each spectator can imagine his own denouement… Andreeea Valean (herself a playwright, author of “When I want to whistle, I whistle”) created a performance of extreme simplicity and expressivity, using what she has just learnt in faculty to give rhythm to both scenic action and filmed sequences, to underline dramatic tension, to guide the actors to a very elaborate performance and to combine all these elements so as to offer the audience the most precious thing theatre can offer, namely emotion.
Paula Niculita(Iulia) and Gabriel Pintilei (August) have freshness and courage, spontaneity and force, humour and sadness.
Alice Georgescu – Ziarul de Duminică, November 15, 2002
Though the themes of the play are death and suicidal, the dialogues are conterbalanced by black humour and irony. “norway. today” is a maturity test for the young director Andreea Valean and the young actors Paula Niculita and Gabriel Pintilei.
Marina Constantinescu – România Literară, November 19, 2002
Scroll