after "Professor Unrat" by Heinrich Mann, directed by Răzvan Mazilu 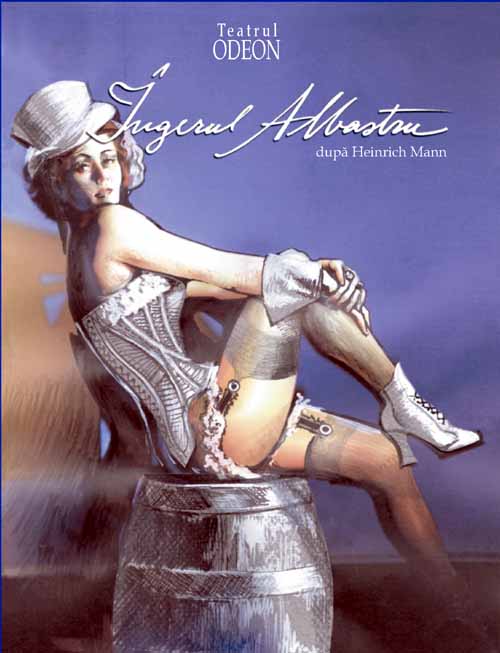 “Words cannot describe a film sequence, words cannot describe an image. Nowadays, “The blue Angel” is used to describe nightclubs, escadrons and remakes: until I gave this title to my film, it had not existed”.
Sternberg changed the ending of Mann’s novel, that was a social story about a professor that marries Rosa Frohlich, a cabaret singer who has a child, and is accepted by the society after making a new career as cabaret singer.
Contemporary audience regarded “The Blue Angel” as a chronic of a decadence period that lasted in Germany for ten years.
“The Blue Angel” is a kind of apocalyptic premonition about the social force that will form the nucleus of the Nazi epoch. The changing of professor Raat’s name to Unrat (=filthiness) is an anticipation of the methods used in the concentration camps, and Rath’s pupils are models of young Nazi soldiers.

The performance at the Odeon theatre shows a highly refined lecture of Heinrich Mann’s novel, but also a huge memory, in which Marlene Dietrich and Friedrich Hollander’s songs defy time. In a few words, “The Blue Angel” is that kind of play that can bring audience into theatre halls again, because it is done after an infallible receipt: a very good text, exceptional actors, alert rhythm, breathtaking music, dance, emotion, humour, persiflation and a very, very truthful message and artistic act. Don’t miss “The Blue Angel” !
Gabriela Hurezean - Național
Scroll