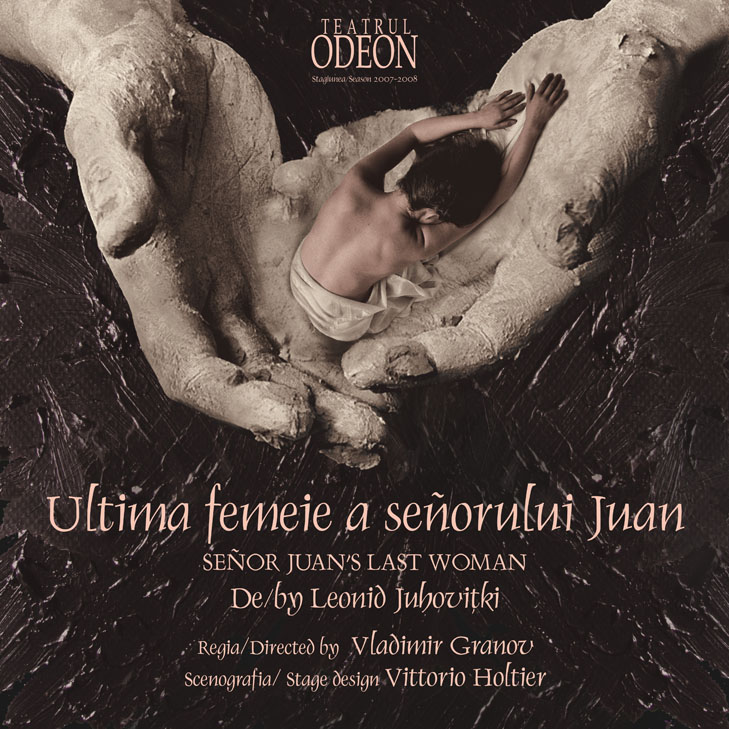 From text to directing and interpretation, this performance can satisfy the standards of any spectator, winning him over, by offering a quality play, which goes directly to his heart. „A beautiful play, with a deligtful troupe”, was the impression of the russian dramatist Leonid Juhovitki who saw the play openning at Odeon Theatre, directed by of his fellow countryman Vladimir Granov. It’s not often that you have the chance to see a show like this which presents a play written in a winsom language, a tragic comedy about a legendary character, Don Juan, in an enchanting construction. We won’t be meeting good or evil characters, but people looking for their happiness. The prose writer and dramatist Leonid Juhovitki, known and appreciated all over the world, proposes with this play written in 1982 an encounter with a different Don Juan than the one we know from Tirso de Molina, since 1630, from Molière, then Byron, and becoming a subject for many writers, but always treated with an unfaire judgement. The Don Juan of Leonid Juhovitki is a fifty year old man, tired from the adventures from which he had been through, hunted by those who failed him, discontented of his ambition of giving pleasure and joy to women. He is a man who has done his share of good and bad and whom will not be punished by the Comandor like in other writings about him, but by means of his life through the metaphoric character, The Executor, who will bring him to an end. All the other characters, from the adolescent Conchita to his wife Elvira, from the officer Carlos to Mijo the poet, all the way through the landlord’s family- typologies described with accuracy by the dramatist- crave for a moment of contentment, either through love or the satisfaction of revenge, but all treasure his intercession of giving pleasure in a sad, grey world. The play has a distinctive merit from the way in which the dramatist combines the poetic with irony and satire. The lines are full of life, of meaning. A play like this about the legendary Don Juan , if it had ended up in the hands of an eager to be above everyone director, could in all probability have became a shocking theatrical illustration, with numerous worthless erotic accents, but in fashion with the present theatre trend. Vladimir Granov, actor, professor and Russian director, has avoided any exaggeration and following the footsteps of Stanislavski, has put together a show filled with emotion, carefully handled, a show in which every stage, with the skilful manouevered lightning, becomes a picture of life.
Ileana Lucaciu – România Liberă, October 25, 2007
The vantage of the performance is it’s subtlety, defined by every actor, in the boudaries set by their role. Florin Zamfirescu builds a complex, complicated and stable character, perfectably suitable with the requirements of his role. His Don Juan is at the same time spontaneous, ironic, metaphysical, human and surrounded by aura, charismatic and abominable, calculated and detached, know- it- all or naiv, adapting to the situation. Katia Pascariu, a recent graduate from the university has a very good acting, transforming the wench from the inn in a role that balances in a good way the role of Don Juan. She has a certain knowledge of sign language, of great use here, and the paraverbal is gracefully adapted.
Irina Mazanitis is excellent in the role of Don Juan’s wife, Mugur Arvunescu is convincing, Mircea Constantinescu pushes his role to burlesque, in an original way, and Gabriel Pintilei manages with success a role of an authentic poet from another time. The play has two essential stakes, which give an important plus: the art of utternace and the art of stage fighting. In a play of this genre, staged after the classical canons, the utternace becomes a point of support, which is ment to individualize the character, more than in other plays. The spontaneity of Florin Zamfirescu, the equal tone of Ionel Mihailescu, the harsh role played by Irina Mazanitis, the over the top declamation of Gabriel Pintilei or the insipid used in the voice by Mircea Constantinescu bring a plus of expressiveness to the stage, keeping the audience interested. The fightning scenes, used carefully by the director (even if or just because he is a biomecanic teacher) have 3 actors performing: Dimitrii Bogomaz (actor with a colossal expresive potential), Ionut Kivu and Relu Poalelungi, perfectly sincronized and convincing.
Alina Boboc – Luceafărul, October 8, 2007
Scroll