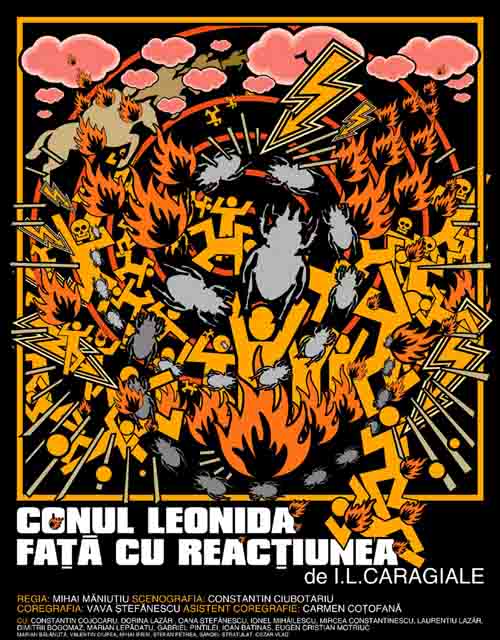 Surprise end of the show is that hallucinations and my wife Leonida revarsă and all over the stage, seem to get a fantastic life, in a delirious blend of candid, and perversion demonic illusions, wild dances and misleading light showers. (...) Text only a few pages, without having said a word, it takes an hour's grotesque vision Măniuţiu. It is a scenic gem of great originality that deserves a chance to be presented at international festivals.
Andrei Băleanu - Radio Deutschewelle (Germania)
Rigid or falsely happy puppets, strange and disturbing appearances, as if coming from Beckett’s plays (isn’t Caragiale a forerunner of the theatre of the absurd ?), the peaceful republicans Leonida and Efimita, played by Constantin Cojocaru, a kind of asthenic mosquito, displaying a dumb joyfulness, and Dorina Lazar, an obese matron, with slow reactions ( a flawless portrait), seem to be minor characters in the all-around motley chaos, whose fetid stench seems to surround you… A “mean” performance, a sad, bitter performance, that makes you suffer and is born out of suffering… A true Caragialean performance in the Caragiale year, the Caragiale century, the Caragiale millenium….
Alice Georgescu - Ziarul de Duminică, December 22, 2002
Scroll