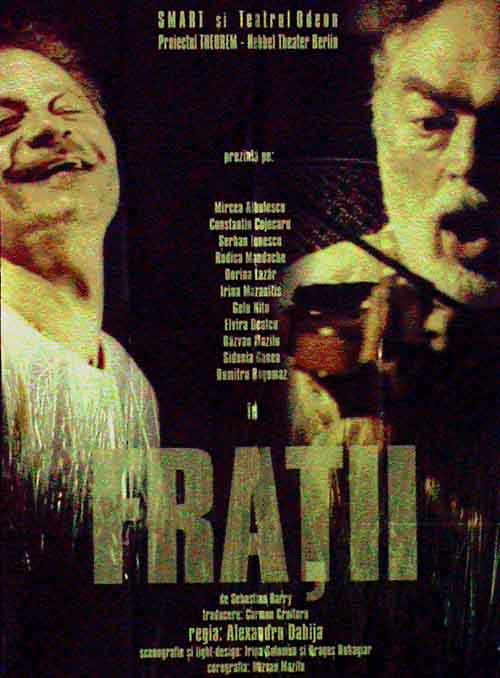 The Boss Grady’s Boys is a performance you must resist. It makes you unable to breathe in . Personal criteria seem to no longer function, when facing the cheap tragedy . Difficult to describe, even after some time, the performance has the massivity of the impossible dramas, disguised into resignation, that seem to be almost normal. A mentally ill person remains a sort of an old baby. He whines, he falls asleep when you don’t expect it , he wets his pants, he crawls and cries after his mother. His dumb, blonde and beautiful mother, who haunts his unnkowingness like a miserable doll. When the rain comes,.the old child outlives everybody, eating tea, bread and butter, wearing his brother’s Sunday trousers, strong and extremely robust. Choleric and restless, the father, falls into an abyss. Tragical and fluffy, the mother gets diluted somewhere, sometime. The soul of the woman who has been raped into a ditch dies. From now on, she can only capabila dance her basic instinct. The farm with high grass is invisible, the brother is covered with the dust of old dreamsthat have been abandoned after endlessly trying to fulfill tem. The rest of the world puts on the poker mask, revealing its frustrations after drinking some whisky. And I cannot say how much longer the image of resignation, of the two brothers, who look to their life almost as to a comedy, will still haunt me.
Roxana Ichim – Ultima Oră
The performance has all the ingredients of an exceptional avent: A very good contempory play, praised in Great Britain and France, and a remarkable staging, in which rigour comes from poetry, helped by remarkable actors, in a set of hallucinating beauty. The play is made up of the memories, the fragmentary conversations and the dreams of two btothers who have come to an age when they can no longer separate, nor leave the place where they have been born. Essentially, the play illustrates a difficult problem of the contemporary society “What shall we do with the old ?”. It’s a warm, friendly atmosphere.Time passes by without pathetical writhings. The Universe is made up of concentrical circles: a beautiful country, exploited by foreigners, a place where people always talk about freedom,a city deserted by the young, a hill, a poor farm, a small old house, where grass grows.
Aristiţă Albacan – Ziarul Financiar
With the help of the actors, Alexandru Dabija proves to be, once again, an advocate of classical performances, spreading a sort of humanenness, from which sadness does not eliminate light and hope.
Eugen Comarnescu – Cronica Română
A long expected premiere, an elitist text of a great contempory playwright, Sebastian Barry, a coproduction SMART–Odeon Theatre and an attempt to render sensibility to a world dominated by vulgarity. Much more, a remarkable minuteness of all the actors, who are very convincing in their small and, sometimes, unexpected parts. All these, in a hallucinating set– Irina Solomon and Dragos Buhagiar had an excellent idea– where the huge grass grows on the poisoned sep of the memories, suffocating any attemp to run away. The only beings that inhabit thei space are the ghosts of the past– chimeras that haunt and petrify the two brothers.
It’s a performance which makes the spectator to be more anxious, to ask himself more questions, that cannot have a calming answer. Un very rare artistic event, for a very rare public, that bears the signature of Alexandru Dabija.
Claudia Dăboveanu – Evenimentul de week-end
Alexandru Dabija proposes us to meditate, no matter how old we are, to think what means understanding, adapting, to discover a the fundamental mechanism of a couple, the way in which one can view the world, not as the prisoner of its agitation, but the tenant of a lonely farm, the easiness with which one can accept that he has no future, or that his future is made up of pieces of he past. The sets and light design of the performances are highly refined. Alexandru Dabija communicates with Irina Solomon and Dragos Buhagiar throughfully and deeply. The set they have imagined for “The Boss Grady’s Boys” is very impressive: o Green, fresh leaves of grass that invade the scene. They are, also, a part of the story.
Marina Constantinescu – România Literară
Scroll