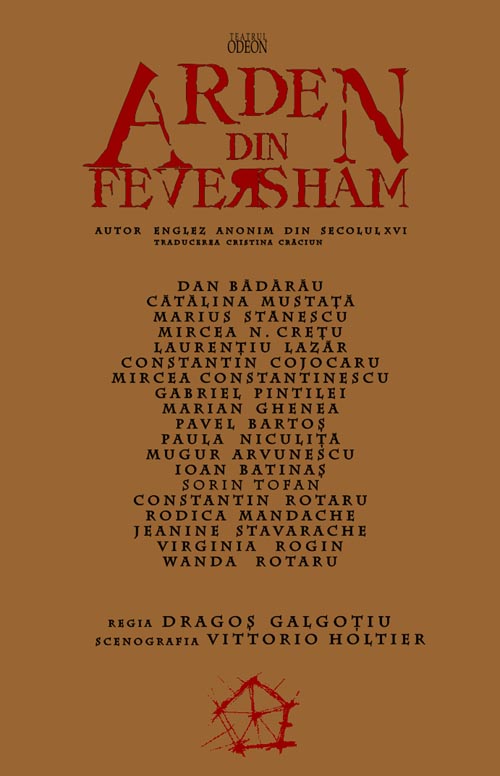 The play is inspired by a real event, that took place at Feversham, a small town in the south of England ( between London and Canterbury), in the county of Kent.
Thomas Arden became known after being killed in his own house, by his wife and her lover. Arden’s house still exists, near the abbey in Feversham. The crime was committed on February, the 15th, 1551. Raphael Holinshed, in “Chronicles of England, Scotland and Ireland” narrates the episode on five pages. A short story about the crime is included in “Stow’s Chronicle”, as well, and the facts are recorded in “Wardmote Book of Feversham”. All those involved in this story, were arrested , judged and sentenced to death. Alice was burnt in Canterbury, Mosbie and his sister were hanged in Smithsfield, London and Michael was hanged in chains in Feversham.All their accomplices ended tragically.
The story became famous in 1592 when “Arden of Feversham” was published. Though the events had taken place 40 years before, the people were still interested by this subject. The author of the play is unknown, though Shakespeare, Kyd, Marlowe, Green and Francis Bacon have been credited with it.
“Arden of Feversham” is the first domestic tragedy in English literature, inspired by common people’s life. It can be regarded also as the first comical thriller, because of the grotesque actions of BlackWill and Shakebag, that are a counterpart to the passionate relation of Alice and Mosbie.

“Arden of Feversham” captivates the audience by the spectaculous style of stage directing. Dragos Galgotiu is helped by Vittorio Holtier’s Renaissance-like set and by the devotion of the actors. A great admirer of Shakespeare, Galgotiu emphasizes Shakespearean elements: the lust ending in murder, the deep fog, the premonitory dreams, all of them meant to trouble the spectator.
Cristina Iamandi - Gardianul
Scroll