Traces of Destruction on Mars

A Performative Installation by Cinty Ionescu with poems by Bogdan Ghiu 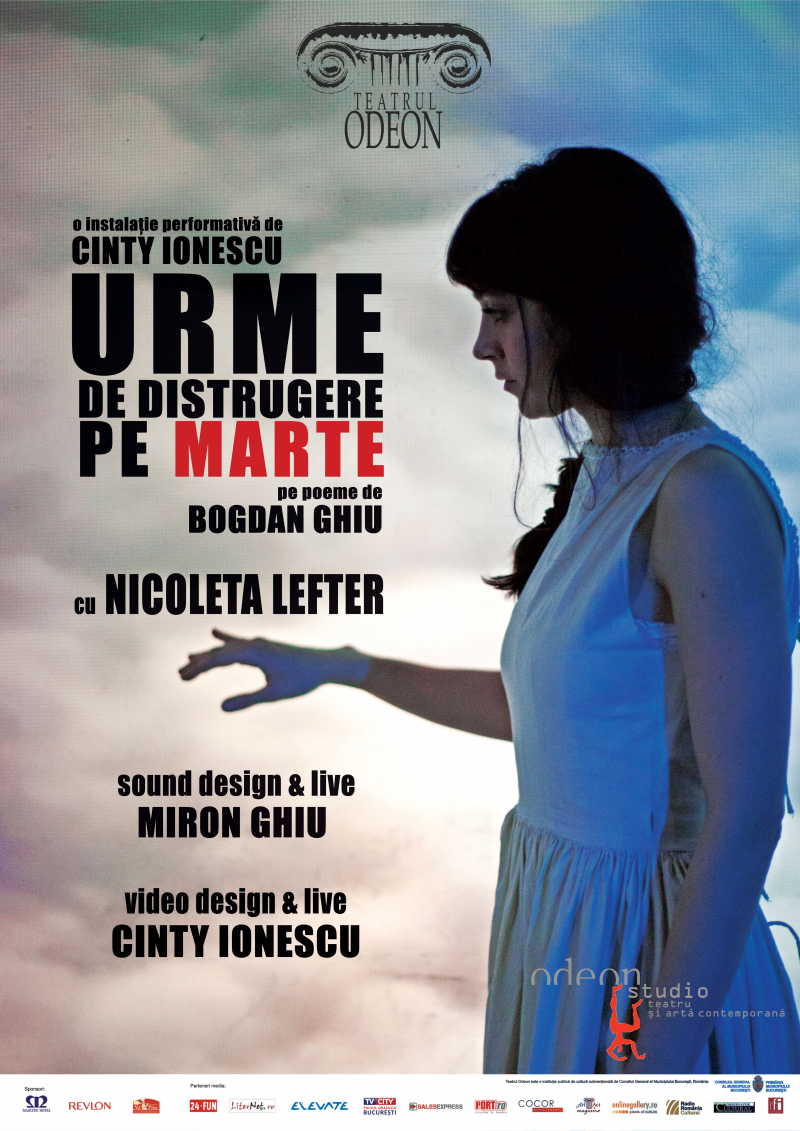 Traces of Destruction on Mars is a performative installation in which several media actively work towards the live interpretation of poetry which is being re-written while it is interpreted and commented upon by the creators of the performance, by means of the performer, the video projection and the sound, adding each time a new layer of meaning.

Being specific to postmodernism, the re-writing and repositioning of content in relation to context is more than a re-mediation of words or sensations and contributes to the text with additional meaning. The traces of destruction on Mars visit us like a future memory. On a background of meta-textuality, the author delivers his poetic theses in the presence of the performer, thus creating a spectacle in itself. The performance bases itself either on metaphors or the interpretation thereof related to the cycle of life by means of the three media employed.

Bogdan Ghiu on the performance Traces of Destruction on Mars.
The trans-medium vocation, of migration from one medium to the other, in other words, the metempsychosis of thought, equally appears as the vocation and secret message of what started in 2006, as a volume of poems which were scanned and photographed, turned into image, projected on walls (in a way similar to Lascaux and Altamira), but also spoken - (The Cardboard Poem) Traces of Destruction on Mars. This experiment was seemingly meant to continue and actually stage the very definition and purpose of culture (in the sense of cultivating human traces on Earth): that of slowly but surely progressing into body, flesh and gesture, addressing. Is not in fact the paradox of traces and the impossibility of hiding and destroying, the minimal definition of life which requires care and cultivation? To all those who had or will have the trust to raise a tribe with me, a discrete but definite knowing sign.
Cinty Ionescu is a video artist whose work evinces a constant concern for live video experiment occasionally in relation to other media. Her experience varies from her beginnings as VJ in Bucharest clubs, where she collaborated with various musicians, to multimedia installations and video design for theater and dance shows. Cinty Ionescu presented her works in numerous national and international venues and in 2011 she was granted the Excellence Award for the video design of the play Nils’ Fucked Up Day directed by Peca Ștefan, at the Fringe International Festival in New York.

Bogdan Ghiu is a poet and theorist of culture (literature, philosophy, media, urbanology, art), journalist and translator (Bataille, Foucault, Derrida, Deleuze, Bourdieu, Baudrillard, Guattari, Bergson, Ricoeur, Veyne, Rorty, Baudelaire, Artaud, Breton, Duras, Calaferte etc.), former member of Cenaclul de Luni and student of Jacques Derrida. His most recent poetry book is (The Cardboard Poem) Traces of Destruction on Mars (2006), and his most recent essay volumes are Countercrisis, Dadasein and Inconstruction. For an Ethical Architecture (2011). He is part of the editorial team of the Idea artăsocietate magazine and a permanent collaborator of Arhitext Design.

Nicoleta Lefter graduated from the Theatre Department, the Acting Section, of the Art University George Enescu in Iaşi, in 2006. She collaborated with the National Theater in Iaşi, the National Theater in Constanţa, the Maria Filloti Theater in Brăila, and the Toma Theater in Ploieşti. Since 2008 she has worked with the Odeon Theater where she acted in plays such as: Confession at Tanacuby Tatiana Niculescu Bran, directed by Andrei Șerban, Extreme by William Mastrosimone, directed by Sorin Militaru, Such Hope by Hanoch Levin, directed by Radu Afrim, Hell Is the Memory Which Cannot Change Anything by Jonas Gardell, a play staged by Mariana Cămărășan și Alexandra Penciuc, Life Is a Dream after Calderón de la Barca, directed by Dragoș Galgoțiu, C.F.R. (The Romanian Railway Company) The Comet, the Child and the Little Dog after texts by I.L. Caragiale, directed by Alexandru Dabija. She played roles in films such as Youth without Youth, directed by Francis Ford Coppola and 8 Minutes, directed by Florin Kevorkian.

Miron Ghiu works as a sound designer and DJ, as well as a freelance journalist for various off and online publications. He has a keen interest in music and new technologies and tends to use as many media as possible in his works. He is a transhumanist and loves robots as much as people, waiting for the technological singularity. In 1998 Miron Ghiu was awarded the second place at the International Philosophy Olympiad, with an essay on virtual spaces.

He studied Philosophy at the University of Bucharest and started to work at the end of the 90’s as a journalist specialized in new media and music. In 2004 he published books with the Humanitas Publishing House on The Beatles, Ozzy Osbourne and Marilyn Manson. He has a constant collaboration with Radio Romania Cultural.