The show can be performed with subtitles in English. If you are interested, please let us know at the box office or by mail, at last two days before the show.
We kindly ask you to check if the subtitles are available before buying your tickets 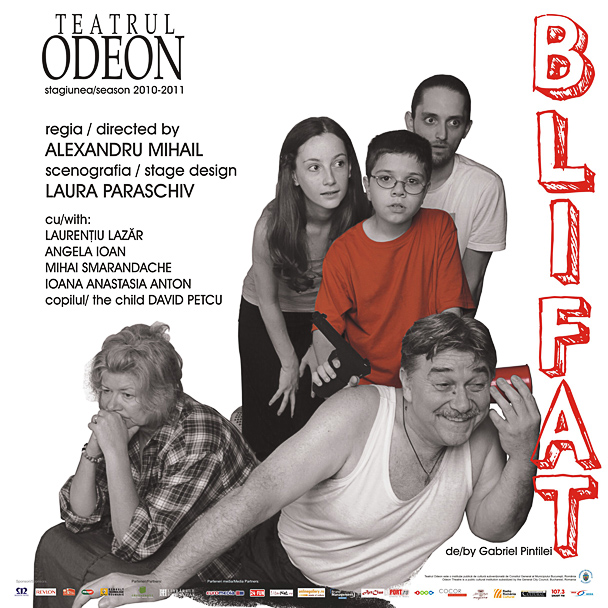 A common family in Romania. A flat with three rooms. An absolutely usual Sunday ... Until a point. Mother, father and three kids: The Oldest, The Middle and The Little One. From this day on nothing will be the same anymore. Nobody suspects what The Little One knows. A piece of life from our everyday life. A comedy. Just comedy. Tlicked!

What is Tlicked? It is a family story, a family from nowadays deep Romania, seen through the eyes of a child (the Little One). His innocence makes comedy from drama and from the most hilarious situation something to pay attention to, so as to, in a cheerful tone but full of bitterness, there are displayed daily rituals of a poor life lived in promiscuity by all ages. (...) The way the author captures the psychology of the kid who thinks of himself as a man, assuming and leading to perfection the bad habits of the family, is delightful and convincing. As how Pintilei orchestrates around the child character the other threads of the action, each character having its own biography and a sense of meaning in the whole assembly.
Doina Papp – Revista 22, October 2010
Tlicked is a show above average quality of the scenes in Bucharest. And that's a big deal. The child David Petcu is absolutely amazing, especially because he has not a score of two lines, as it happens, but he "keeps" the entire show, he is the one who makes and breaks the threads of the story. And the ones of the entire show.
Robert Bălan – România Liberă
A topic of social inspiration and implications, well conceived and led by Gabriel Pintilei. An interesting stage design, signed Laura Paraschiv. The artistic direction of Alexandru Mihail - confident, firm, involved, with personality.
Răzvana Niţă – port.ro
In Tlicked of Odeon Theatre in Bucharest, an eight years old boy punishes his family for intolerance and the genetic inheritance that he received. The little boy with poor vocabulary and above average high-tech knowledge is the corrupt reflection of the soul of his parents. Gabriel Pintilei’s text, playwright of a second play written after Elevator, puts under the microscope a cell (base) where is found the essence of Romanian family type.
Dan Boicea – Adevărul Literar şi Artistic
Gabriel Pintilei's text is very tough in its realism and because nobody likes to be put in front of a mirror, the playwright chose to underline its comic side. But the laughter remains in the neck. Too many of us find themselves in the story, the lines are too true, too many felt what The Little One implements. Directed clean, in the same realistic key of Alexandru Mihail and Laura Paraschiv’s symbolist scenery, the Odeon’s show has the fluency of a new wave Romanian film. And would remain a debate generator if the final tragedy wouldn’t demonstrate that we stand, in fact, on a powder keg and is not much time for discussion. The family is dysfunctional, and its deficiencies are quantified in the maturity of children.
Oana Stoica – Liternet
We have to do in the show with a mimetic rendering of reality, which seems to be carried out in a verbatim method (accurate recording of real dialogue and their implementation, with minimal editing, in plays) long practiced on the English stage, and more recently, on the Russian one.
Tlicked is an accurate picture of a day in the life of an ordinary Romanian family. It fits perfectly into what has become a trend in our culture, detectable primarily in movies released in recent years with huge success in the great festivals of the world and also in the next generation literature.
Cristina Modreanu – Art Act Magazine
Scroll