The Adventures of Dunno 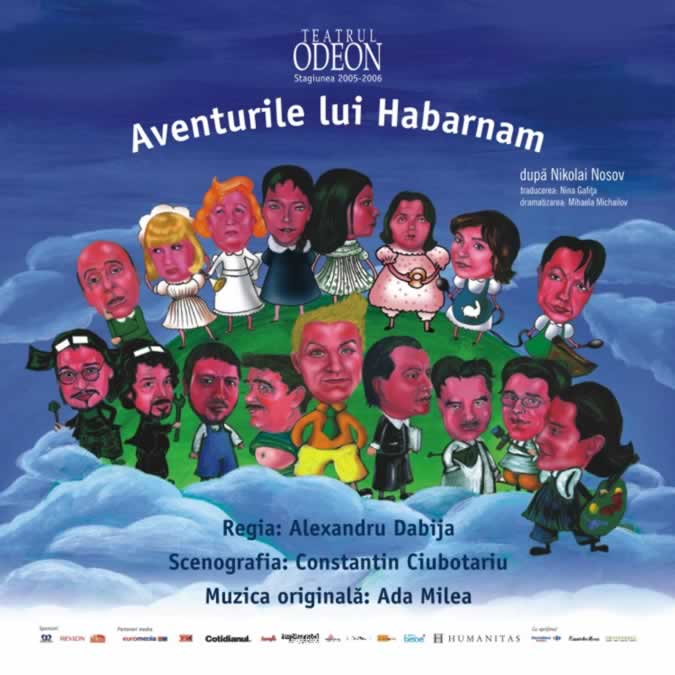 A playful, innocent and humorous performance with grown-ups turned into humpty-dumpty and tiny tots in a world of a fairy tale. The Adventures of Dunno, is based on a classical book of childhood, that fascinated whole generations of children. Full of color and imagination, the Odeon production has the neccessary ingredients to enchante for two whole hours both children and grown-ups.

It was the childhood hit for a lot of us. The blue hat and the coloured clothes, his antitalent...developed many-sided, his natural incapacity to do something are only the premises of the adventure. From the books read at some point, Dunno arrived directly at Odeon, on the stage, impersonated by Pavel Bartos, in a ruberry, cheerful setting, signed by Constantin Ciubotariu.
Elena Vlădăreanu – Averea
A world that functiones somehow by the laws of a cartoon, in which the accidents do not lead to serios injuries, and the space-time distorsions are accepted easily by the heros and those who watch.
Dana Duma – Economistul
So wonderful that its image becomes, all of a suden, the emblem of a misterious land, that you try (in vane...) to find, later, every time you step again into a theatre.
Alice Georgescu – Ziarul Financiar
Watching the performance you have the impression of being present at a movie in which spots fall down from the sun, the dandiprats look for a refuge in a balloon as big as the scene, which lifts to the sky, you get into the Flowers town and the Cucumber town, or the Onion town, everything imagined with scrupulousness in a fantastic spirit, but realisticaly animated.
The Adventures of Dunno remains an original performance, an inchanting „film” by the director Alexandru Dabija, of whom we have the conviction that will not dissapoint neither the little spectators, or the adult ones.
Ileana Lucaciu – Timpul liber
Scroll