How I met my husband

Light as a snowflake

The chief commander of Chinese army

The husband who grows less

In front of the door

If I were you

He: Ionel Mihăilescu
She: Dorina Lazăr

The hat which becomes bag

Such hope at the end 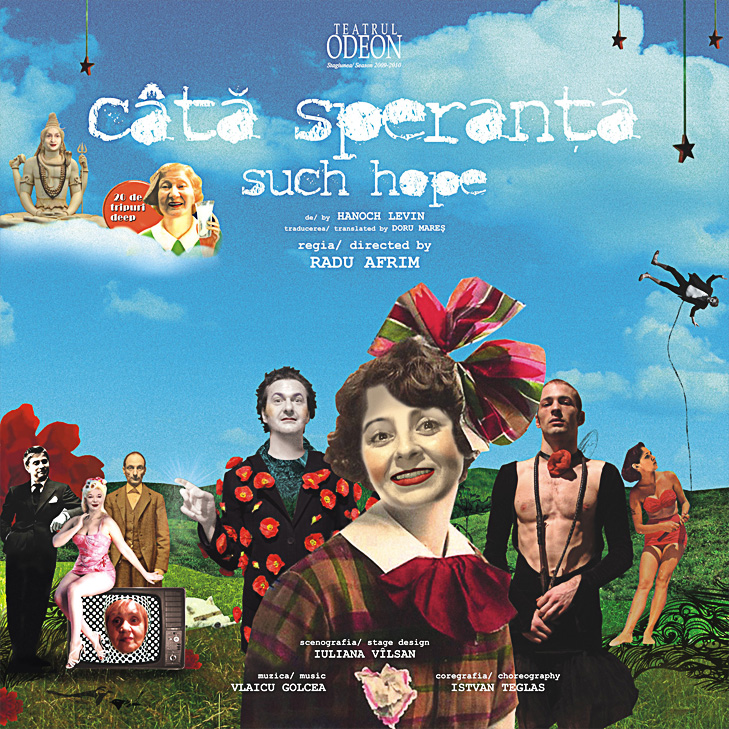 How many people are getting up in the morning with the hope that?
And how many know that they are hoping under their own responsibility?
And more how many know to deal with the deception provoked by what we pathetically name “the collapse of hopes”?
People from these 20 short texts I’ve chosen are not asking for much. One hopes to find a companion to follow him in the fantastic trip on the pedestrian crossing, other hopes to see his wife in the magician’s black box full of tricky diamonds, an actress hopes to learn entirely a song without being out of the tune or to dance bossa nova “with all the moves”, another fully hopes to receive a blue hat that has its origins from the end of Australia, o geography teacher hopes to convince the world the Earth is flat and she even succeeds, a dreamer hopes the hot dog saleswoman to be transformed in Caroline of Monaco, an exalted guy hopes to enter in a man’s shoes only to touch his wife’s breasts, o woman “wants a change/my life is a failure”, a man hopes to reclaim his wallet forgotten to a former mistress some decades ago.
And then how much hope entered (and got out) somewhere from the doors of our set design… doors taken from the demolished houses. To all this I would ask you to think about when nothing is told on the stage…
Radu Afrim

Such hope is an about 3 hours show, in which Radu Afrim manages to encompass his whole creative universe, and also manages to expose his own conception of art, world and perhaps the future. It is a show where we find “afrimism” in its full complexity: characters with uncertain identities, animal symbols and metaphors, hallucinatory songs, kitsch costumes and extreme states of confusing consciousness. It's a show with everything that Radu Afrim means in terms of theater, with good and bad.
Visceral and painful as a testament, Such hope brings together 20 sketches belonging to Hanoch Levin, sketches that speak in an absurd, grotesque, often trivial language, about missed characters and universes in dissolution.
Alexandru Bumbas – www.yorick.ro
Afrim's shows open windows to caricatured philosophical meanings. It can be liked or not, but are recognizable, they have the cut, the tailoring and "la griffe" of a stylist already confirmed. Afrim is the creator of a universe that compels kitsch, grotesque, innocence and cruelty to live together peacefully in the hope of the reconstruction of another paradise. Whether it is chaotic, distorted, disproportionate, dissociated. Such Hope… you can’t help to babble. Such Hope, a scenario on texts by Israeli playwright, Hanoch Levin, is Afrim's pretext to put reflectors and glamour on acting performances, some - graceful reconfirmations, others - notable and surprising at the Odeon. Around the dying hope it is articulated this puzzle of moments and songs, as an illusion in which the director is pumping energy with trumpery in a cabaret with tragic accents.
Adriana Mocca – blogspot
Radu Afrim has everything and affords everything in Such hope, the new show of the Odeon Theatre in Bucharest. Afrim worked with the best troupe in Bucharest, with actors willing to experiment and to go very far with the director in which they believe.
The director has built this show from a position that will always give him the possibility to turn the theatre upside down – the one of a multi awarded orchestrator. It is an angle of which he can afford to risk. Then, he also has within reach a not insignificant item: his courage.
With an adapted text that sounds very good in Romanian, Radu Afrim throws the audience into several parallel universes. His fantasy game is complete. The characters talk colorful, dress flashy, communicate coded, understand each other perfectly and create their own moments of glory, of which almost always come with dignity uncircumcised.
Dan Boicea – Adevărul
In nearly three hours, in the front of you pass through 11 actors and 50 characters. Afrim uses everything theater has to offer – the manager, Dorina Lazar, the sound technician, the man who carries the furniture, the decorative angel on the first lodge and side entrances and exits.
The world in which all of them live their "20 deep trip” is delimited by doors and keys, the images of flying fishes as in Arizona Dreaming, imaginary objects and flowers stuck on windows, chalk lines and bottles of milk. Everyone minds his own story, dragging his follies and his hopes.
World, world, go to the theater! You'll see clowns, magicians, chicks, kangaroos, teachers, peasants, dancers of all past ages, Chinese, Nana Mouskouri, dairy guys, singers and Rodica Mandache in the role of Rodica Mandache. But it is not so simple: they are all passed through Afrim's magic lens, who I beg not ever play in his home with his obsessions.
Cătălina Miciu – www.liternet.ro
Radu Afrim has again hit the domestic market (yet quite steady) of theatrical shows. The staging gives us the opportunity of coming in a cabaret, a pop art show, a meeting with stirring souls, consumed by hope.
Everything happens (actually, nothing is happening) in the neighborhood space. At the limit, all the protagonists are neighbors of existence, of survival in a spacious courtyard as the Garden of Eden. Hanoch Levin drama offers us a very special universe, seemingly domestic issues, broken relationships between people, a mixture of irony and cynicism. The show has a sharp sense of humor, aseptic, very British but also ionescian, in an excellent translation signed by Doru Mares.
Răzvana Niță – www.port.ro