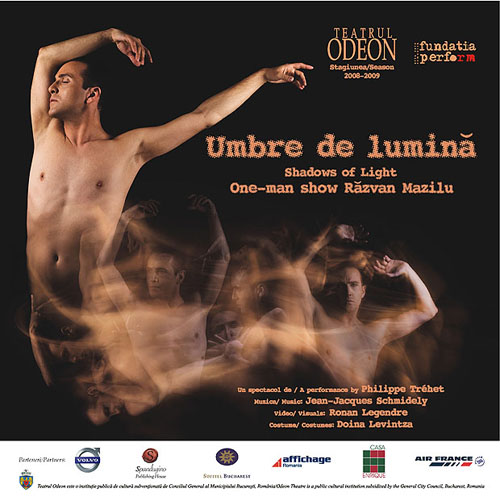 Razvan Mazilu has the gift of using (in the most nobil way) the dance to convey emotion. It is what makes the casual spectators of his shows be converted into admirers.
Răzvana Niță – port.ro
Shadows of light is a choreographic speech in which two connected intercessions are synthesized: a mythical and a psychological one.
All the meanings are decoded thanks to the happy encounter between the choreographic style of Philippe Tréhet and the interpretative capacity of Razvan Mazilu who – must be said – remaines yet to be equaled in our cultural space.
If you want to sit down at the shelter of revelead senses trough a rigurous coregraphic speech and an impecable interpretation, go to see Shadows of light!
Gina Șerbănescu – Dilema Veche
Everything you will see in this show will induce unexpected sensations, filled with emotion. The public breath is taken away when the musical illustration goes silent, following fascinated the passing of the hero into another state of his sufferance. The shadow effort of the team which realised the show couldn’t have the credible resonance without Razvan Mazilu which interpretation is excellent, exceptional.
Ileana Lucaciu – România Liberă
Razvan Mazilu dances for one hour alone on the stage, in a spectacular and refined show of contemporary dance, with a lot of video projections. In a marathon full of virtuosity, but also nonconformist.
Simona Chițan – Evenimentul Zilei
Scroll