The Resistible Rise Of Arturo Ui 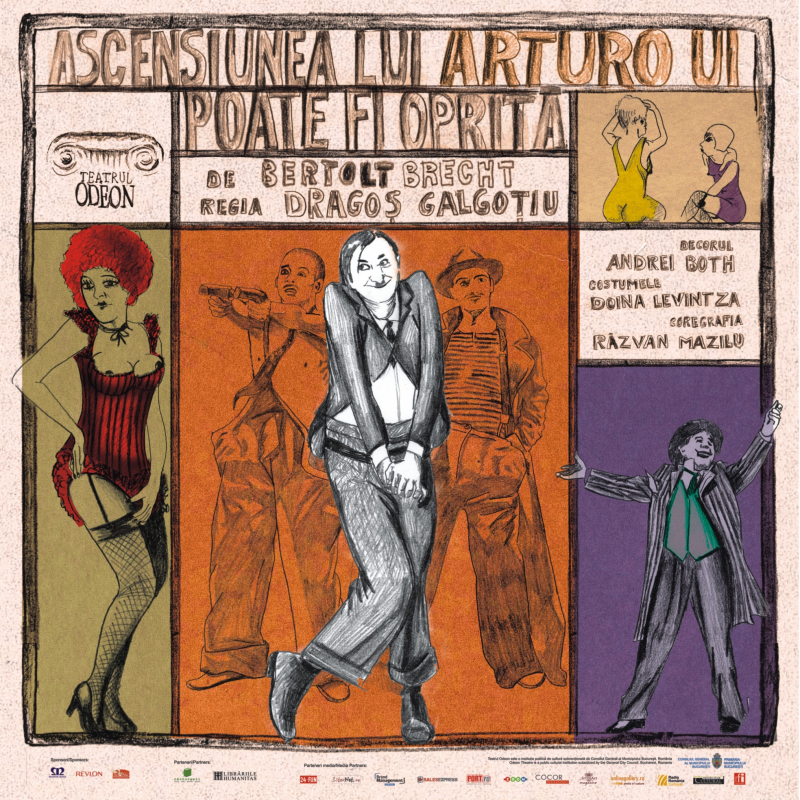 The show can be performed with subtitles in English, by request.
If you are interested, please let us know at the box office or by mail, at last two days before the show.
We kindly ask you to check if the subtitles are available before buying your tickets

The Resistible Rise of Arturo Ui, a satirical parable about the rise of Hitler, was written in 1941, in Helsinki, Finland, where Brecht awaiting a visa to enter the United States. It takes place in the gangster world of Chicago, all the characters in the play having direct counterparts in real Nazi Germany. Arturo Ui represents Hitler, Ernesto Roma is Ernst Röhm, Giussepe Givola looks like Joseph Goebbels, Emanuele Giri represents Hermann Göring and Dogsborough reminds us of Paul von Hindenburg.

The play was first produced in 1958, at Berliner Ensemble with great success. On the same stage in 1995 Heiner Müller directed a new version which is still in the repertory of the prestigious company in Berlin.

In 1963 the play was put on stage at Giulesti Theatre, under the direction of Horea Popescu, the stage design of Jules Perahim, with Ştefan Mihăilescu-Brăila as main character. The same year another great actor, Ştefan Iordache was making his debut in Arturo Ui on the stage of Casandra Studio. The Odeon Theatre production is a black comedy with cabaret elements. In a time when politics stifle through aggression, the theatrical staging responds with irony, showing that the monsters of political world are not only terrible, but also extremely ridiculous.

The staging continues radical aesthetic experiences, The Picture of Dorian Gray, Hamletmachine, Epic of Ghilgamesh and Life is a Dream, made by Dragoş Galgoţiu in collaboration with set designer Andrei Both, costume designer Doina Levintza, choreographer Răzvan Mazilu and important actors of Odeon Theatre.