Life is a Dream

based on Calderón de la Barca, directed by Dragoș Galgoţiu 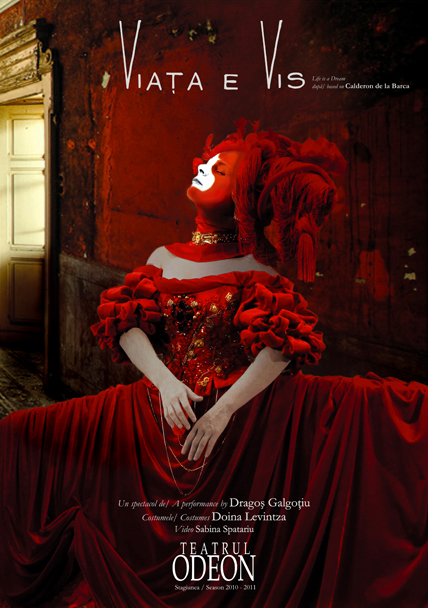 Life is a Dream (1635) is the most famous play by Calderon de la Barca, a philosophical allegory about human condition, about the mystery of life and the illusions of real world.
Life is a Dream imagines the story of Segismundo, incarcerated since birth by his own father, King Basilio, fictional king of Poland. The plot of the play has two origins, the life of Buddha and the real story of Don Carlos, the prince deformed from birth, locked and killed by his father, King Philip II of Spain. Segismundo is a paradigm of the human being locked in the illusory game of existence.
The Picture of Dorian Gray, Hamletmachine, The Epic of Ghilgamesh, Life is a Dream, texts with a moony light, melancholic, reflexive, became laboratory themes. The staging of this kind of text is rethinking, the theatrical form is like an alley in an oriental garden, drawing an emotional time of thinking.
Dragoș Galgoțiu

The show at the Odeon has a particular poetry, taken from the art which has access to genuine heights and the public can only be grateful that there are these kinds of experiment which help him to restore, by means of theatre, the way to the foundations of thought. Or of the dream.

Dragos Galgoţiu at all interested in "present-day", continues the aesthetic program started with The Picture of Dorian Gray. The same delicate labor on the text, the same struggle for the incarnation on the stage of philosophical ideas, the same combination of Mannerism and Expressionism. Galgoţiu shows here also a fine invention which seemed inexhaustible, helped by the wonderful costumes of Doina Levintza that recreates kind of Velasquez’s figures, and by the subtle scenography where no object is exactly as we know it: escapism is programmatic, according to the text, which is merely a pretext for exposing ideas and especially with Rosaura’s line: "My clothes is a mystery, / and I am not how I beseem." In addition, Galgoţiu has a deep knowledge of the integration of music, light and video projections on the show.
Liviu Ornea – Observatorul Cultural, February 11, 2011
The director Dragos Galgoţiu invites us with every show to a subtle hermeneutics of dramatic text. The show played at the Odeon Theatre is like a canvas embroidered with postmodern interludes (the scenes and theatrical speech fragmentation, fine examination of the inner states of consciousness, emphasizing the characters' existential crisis), Baroque inserts to place the drama in the context where it was created (the musical fragments which announces the appearance of characters on stage, projections with excerpts from famous paintings of the Baroque era) and a symbolically inventory appropriate to baroque context.
Marinela Florea – Liternet, February 8, 2011
Scroll