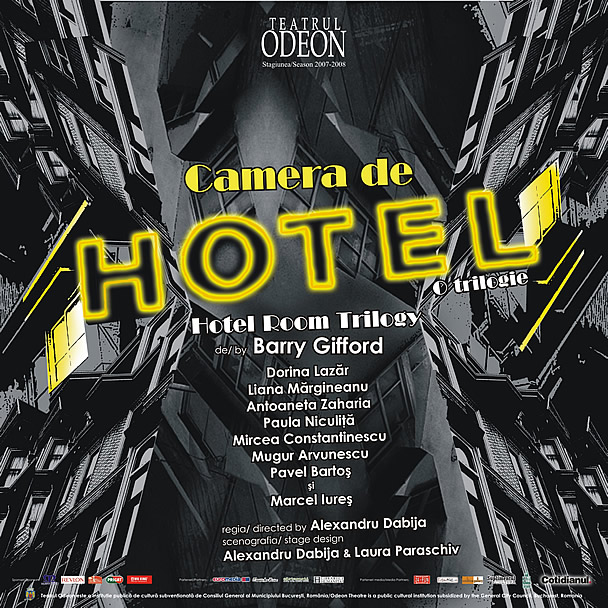 The successive ocupants of the room are signs of an uncertain universe, people are not what they seem to be: the peculiarities occur after a banal switch of a phrase, the certainty of the moves in a familiar world is destabilized, the explanations do nothing but deepen the mistery, the identities become blurry, the words preserve the logic of normality, but what they express belongs to a world of obscure instincts, of unexpressed obsessions, of a past half forgotten, half deformed. And this continuous switch between the reality as we know it and what we don`t know becomes the essence of the play.
Magdalena Boiangiu – Adevărul Literar și Artistic, March 26, 2008
The new performance directed by Alexandru Dabija at Odeon Theatre is a kind of theatrical tonic gin, with a drop of paranormal in a glass of black comedy.
Gabriela Lupu – Cotidianul, March 18, 2008
The trilogy with the same title, written in 1993 by the American novelist and playwright Barry Gifford especially for David Lynch (who directed two years later two of the plays of the trilogy) gave Dabija the opportunity to play with some of his favourites elements: mentally ill characters, extremely simple set design and black humour. And offers him something else: the chance to bring back Marcel Iures – the most important Romanian actor at Hollywood – on the Odeon stage.
Oana Pulpă – Money Express, April 1, 2008
Built in a set reduced at its essence, the stories of Gifford receive in Alexandru Dabija`s play the sharpness and the depth of a haiku. Nothing is excessive, nothing is exaggerated and, on the other hand, an almost surgical precision in cutting the images. A wave of mystery that crosses like a shiver each of the three moments and accents always set on the right word and on the right image. The tendency to catch the essence that Dabija`s theatre has acquired, obvious in his most recent plays, the search and revealing of the actor’s force, the return to “the poor theatre” as Grotowski foresaw dominates this staging also.
Monica Andronescu – Ziua, March 21, 2008
There is no staging in which Alexandru Dabija doesn’t produce theatrical recitals. The auditorium warms up, the audience marches or walks slowly, hallucinated or just amused, anywhere the actors want to take them. The three independent parts, linked only by the fact that they take place in the same hotel room, have subliminal coagulants that ferment a second level of peculiarity.
Cristina Rusiecki – Cultura, April 3, 2008
Scroll