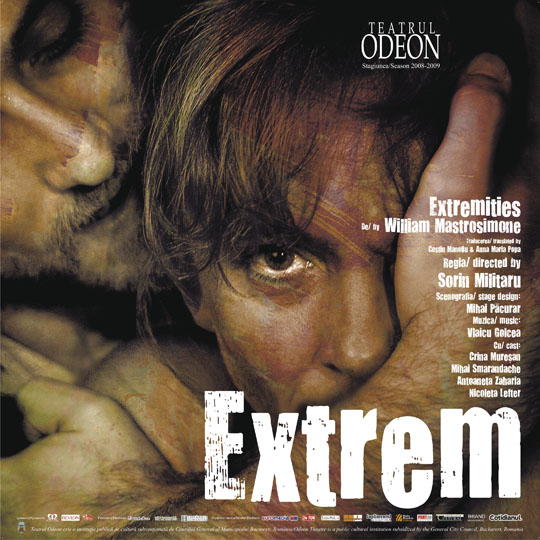 The play is a sample of theatre-debate of high quality, on one side, because of the case exposed – that seems without exit, until the young woman finds the intelligent way to tear off a confession from the violator about his other crimes, taping every word – on the other side, because of the well construction of the roles. Sorin Militaru’s directing is focused on the actors, because the key to assembling the play is their credibility, in reproducing the reactions of the people who find themselves in an extreme situation.
Cristina Modreanu – www.artactmagazine.ro, February 24, 2009
Crina Muresan in Marjorie touches you and you live with her, painfully, convulsive, at the edge between insanity and normality, the terrible trauma that she experiences. It is very difficult to act such an extreme situation, but so often encountered and plenty a times with a dramatic ending. The performance is almost a documentary, because you can find the facts in the play in daily life, no matter it is America or Romania.
Irina Budeanu – Azi, October 24, 2008
The performance Extremities from Odeon, directed by Sorin Militaru brings into foreground the theme of the rape and violence that brutalizes the human being. The text puts into motion a lot of psychological resorts, being also a satire of the justice. Crina
Muresan acts extraordinary the role of the woman on the edge of trauma and the world, which understands that applying the Gospel letter, to forgive, is the hardest thing on earth.
Simona Chițan – Evenimentul Zilei, October 19, 2008
Scroll