Why Does the Child Boil In The Polenta 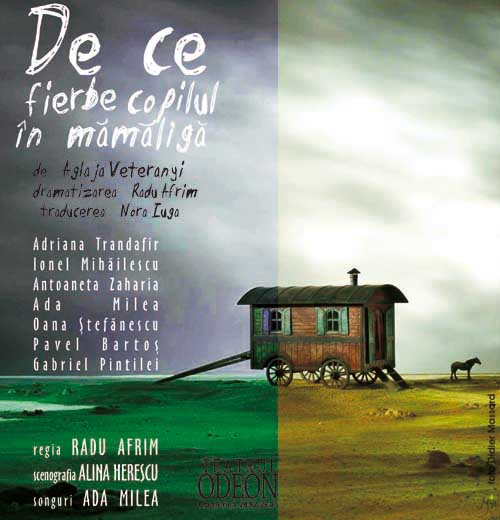 It’s a charming story about a family of circus people, who spend their life on the road.The performance tells the story of this family seen trough the eyes of a child whose existence becomes a gigantic circus show, performed on the earth and in the sky, a voyage with guardian angels and terrifying threats.
It’s the story of a little girl who fears continuously that her mother, the woman with the steel hair (who hangs by her hair from the top of the circus) could die. The child’s fears are annihilated by her sister’s tales about the child who boils in the polenta. The director manages to render the essence of the novel, its lyrical and philosophical tone, the discontinuous narrative flow.
The dramatic moments are not ostentatious or pathetic. They have depth and power. It’s a dynamic and moving staging.
In the performance, music isn’t just a support, designed to make the performance accessible or pleasing, but a decisive element for rendering the message. Ada Milea’s songs are neither nice, nor harmonious. They translate the weeping of the child in the polenta. Antoaneta Zaharia has found the feature that brings together child and adult, namely fear. She lives in a terrible world, but the thought of losing it terrifies her. Adriana Trandafir, Oana Stefanescu, Gabriel Pintilei and Pavel Bartos combine the grotesque of the circus performance with dramatic reasons.
The staging exults humour and playfulness.
Why does the child boil in the polenta ? Because we are afraid. Horror, as the source of the dream, is Afrim’s key to Aglaja Veteranyi’s poem.

Out of a set made of lights, using extremely elaborately, violent costumes, a lot of good songs the mild harshness and the hyper-realism of Ada Milea, that suits the text perfectly, out of frenzy, sympathy, pain, play , humour, dispair and love, out of all these, well-mixed, we witness the birth, the ephemeral life and the transient death of an exotic, yet so familiar world. The passion, the intelligence, the sincerity with which the performance was put together get to your heart and charm you.
Alice Georgescu – Ziarul de duminică
Word, image and music are so carefully and subtly used by both director and actors, that the result is a coherent ensemble. The performance represents an exceptional talent’ coming of age. It’s a beautiful, strange performance, sad and joyful, with a remarkable actress, Antoaneta Zaharia.
Victor Scoradeț – Cotidianul
The first proof of the director’s courage was to choose a novel that is very difficult to dramatise, because of itd highly poetical structure. The second risk was the type of performance he imagined: a musical with the songs composed by Ada Milea, actress, composer and singer, whose previous songs have the same spirit of the novel writer’s poems.
Last but not least, the director has no fear of pathetism. He assumes it, integrates it in his staging and the result is pure, 100% emotion.
Cristina Modreanu – Adevărul Literar și Artistic
Afrim plays wonderfully with conventions, overturns traks, improvises perspectives… His staging looks up to the history of the film, from melodrama to western and cine-verite, in a frantic and exact gold rush. And the gold (the beauty and sadness of the world, the two faces of the coin) shines impressively…
Alex Leo Serban – Ziarul de duminică
Radu Afrim, the poet, tries to find out decoding methods belonging to a highly refined postmodern impressionism. In the spririt of Aglaja Veteranyi, the director forces the spectator to breathe in two hours of amusement mixed with exceptionally tragical counterpoints. The horror, as the dream’s stimulus is the interpretation that Afrim gives to Veteranyi’s poem. Horror makes you laugh and play, in order to forget about it. Horror makes you tell stories, in order to have access to parallel, onirical universes.
Doru Mareș – Observatorul Cultural
Scroll